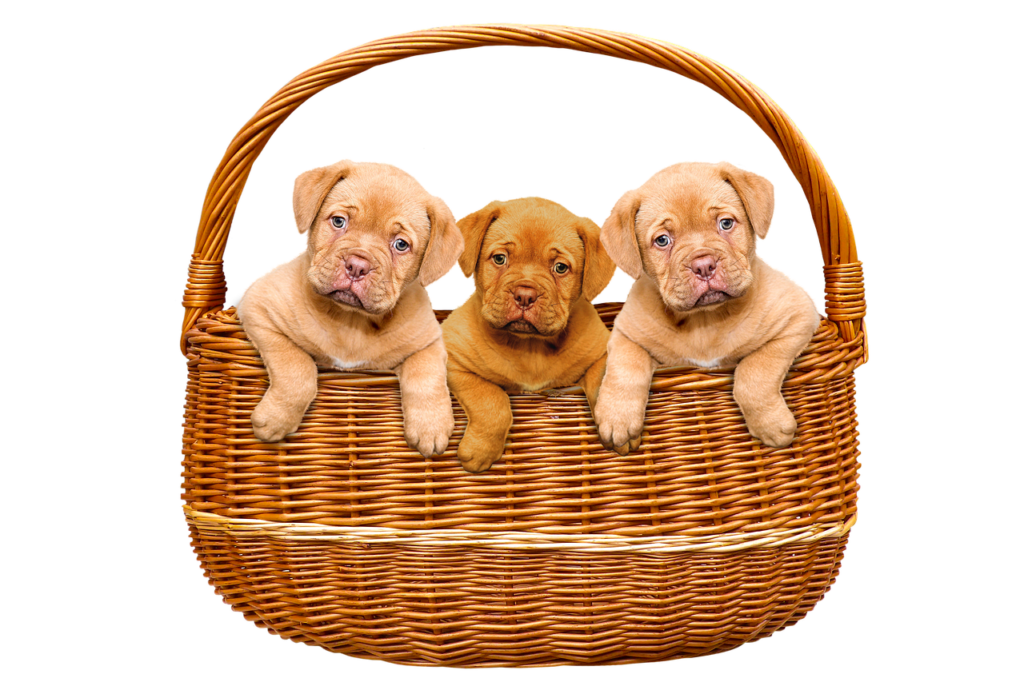 Nimai exhibited His wonderful childhood pastimes along with His mischievous friends. Absorbing Himself in various frivolous games, the Lord spent His days blissfully. One such day, the Lord and His friends stumbled upon a litter of puppies. The Lord picked up one of the pups. His friends protested that Nimai had selected the best-looking pup leaving the rest for everyone else. Nimai replied that the puppy that He had picked up was not only for Himself but instead was for everyone to play with. He continued that He would provide shelter to the puppy in His home.

Tabe Viswambhara kahila uttara, ei shan sabakara
Sabe ek haiya, khelo iha laiya, thakibe amara ghara
(Chaitanya Mangala, Adi, 2.285)
–
Then Viswambhara answered ,”This puppy belongs to everyone. Get together all of you and play with it. The puppy would stay at my home”.

Saying thus, the Lord brought the puppy to His home and tied it to His chair. Saci Mata was not in the house at that time. Having finished her household work, she had gone out to bathe in the Ganges along with her friends. Seizing this opportunity, little Nimai and His friends commenced playing with the puppy at home. They fondled with it, played games, and rolled about in the dust. Suddenly a quarrel broke out. Lord Viswambhara took side with one of the boys and chastised the other. He said, “Every day you come to play with us and then provoke a fight. Why do you behave like this?” The boy accused Nimai of stealing the puppy and then stormed out of the house. On his way, this boy found Saci Mata returning from the Ganges. The boy cried out in a voice choked with anger –

Shuno shuno aare , tor Viswambhare
Shanera shabaka laiya
Kshane kole kare, kshane gale dhare
Apane dekho asiya
(Chaitanya Mangala, Adi, 2.292)
–
Listen here! Your son Viswambhara is now playing in the house with a puppy dog. Sometimes He cuddles with it in His lap, and sometimes He embraces it. Go and see for yourself.

Learning of this, mother Saci returned quickly and found Nimai playing with the puppy on His lap. Banging her forehead, she exclaimed,” I do not understand Your behavior. Despite having everything at Your disposal, You choose to play with a puppy instead! You are the son of such a religious father. What will people say if they see You playing with this dog? This act does not suit the son of a brahmana. It pains me to imagine how people will not speak any good of You if they find out about this”. Saci devi continued –

Ehena sundara murati tohara , dhula makha kiba sukhe
Balite vacana, namaha badana, aagi lagu mor mukhe
Kata chand jini , tor mukh-khani, e thhira bijuri anga
Besh nahi chay, dhula makha gay, adhama balaka sanga
(Chaitanya Mangala, Adi, 2.297-298)
–
(Saci Mata continued) Your form is so beautiful. What pleasure do You derive from smearing it with dust?
I bow my head in shame and simply wish to die seeing You in this condition.
Your face is more beautiful than millions of moons. Your body resembles fresh lightning.
Yet, instead of wearing Your clothes, You smear dirt on Your body and associate with mischievous bad boys.

Fuming with anger, mother Saci bit her lower lip and scolded little Nimai. She asked Him to take the puppy to His room if He loved it so much. Getting enraged, she asked Him to forget about His parents and continue playing with His dog instead. But the sweet face of Lord Gaurahari quickly dissipated Saci devi’s anger. In a fit of bliss, she then called upon Nimai to come and sit upon her lap. She wanted to kiss upon His cheeks. She then urged Nimai to tie His puppy and leave it alone for some time. She asked Nimai whether He felt hungry as it was already late. She then asked Him to go and bathe in the Ganges. 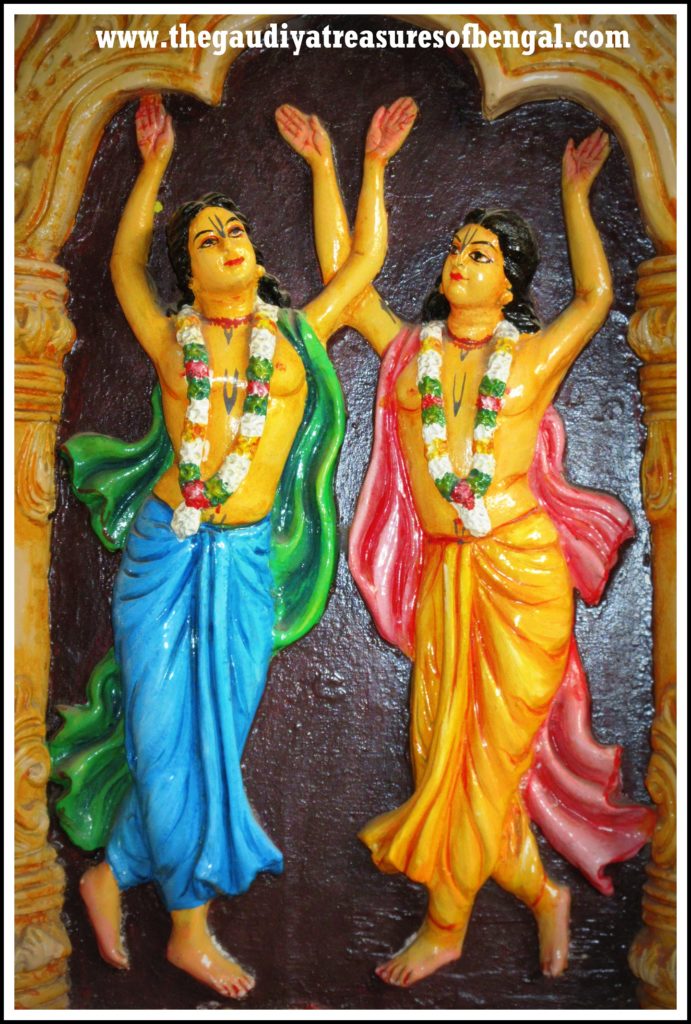 Smiling and entrusting the puppy with His mother, the Lord proceeded to take His bath. Saci Mata cleansed the dirt from Nimai’s body and smeared Him with fragrant oil. At the Ganges, the Lord and His friends enjoyed themselves splashing water at each other. Nimai’s golden body resembled the mighty Mount Sumeru. Meanwhile at home, Saci devi untied the puppy and sent it away. One of Nimai’s friends saw this and immediately rushed to inform the Lord. Nimai immediately returned and not seeing the puppy, seethed with anger. He cried out and scolded His mother. Saci Mata, however, feigned innocence and dismissed any knowledge of the missing puppy. She argued that the puppy was present just a moment before and suggested that someone must have stolen it. ”Why do you cry? We shall search for the puppy and bring it back tomorrow”, she assured.

Saying this, Saci devi wiped Nimai’s tears, put Him upon her lap, and kissed His cheeks. She offered Him Sandesh, Khira, bananas and other tasty dishes to relish. Saci devi then dressed her dear son. She tied three knots in His hair and painted His eyes with black kajal. Around His waist she hung a  beautiful red cloth that stretched up to His knees. She dangled a pearl necklace around His neck while sandalwood Tilaka adorned His forehead. Bracelets and armlets made of priceless jewels complemented His beauty. Donning anklets on His feet and holding onto a Khira Ladu (sweet ball), Nimai went to play with His friends.

His walking defeated the pride of the elephants and His deep voice appeared sweeter than nectar. Encircled by His friends, Lord Gaurahari resembled the full moon that was surrounded by stars. The demigods derived great joy witnessing Lord Gauranga manifest such wonderful pastimes. 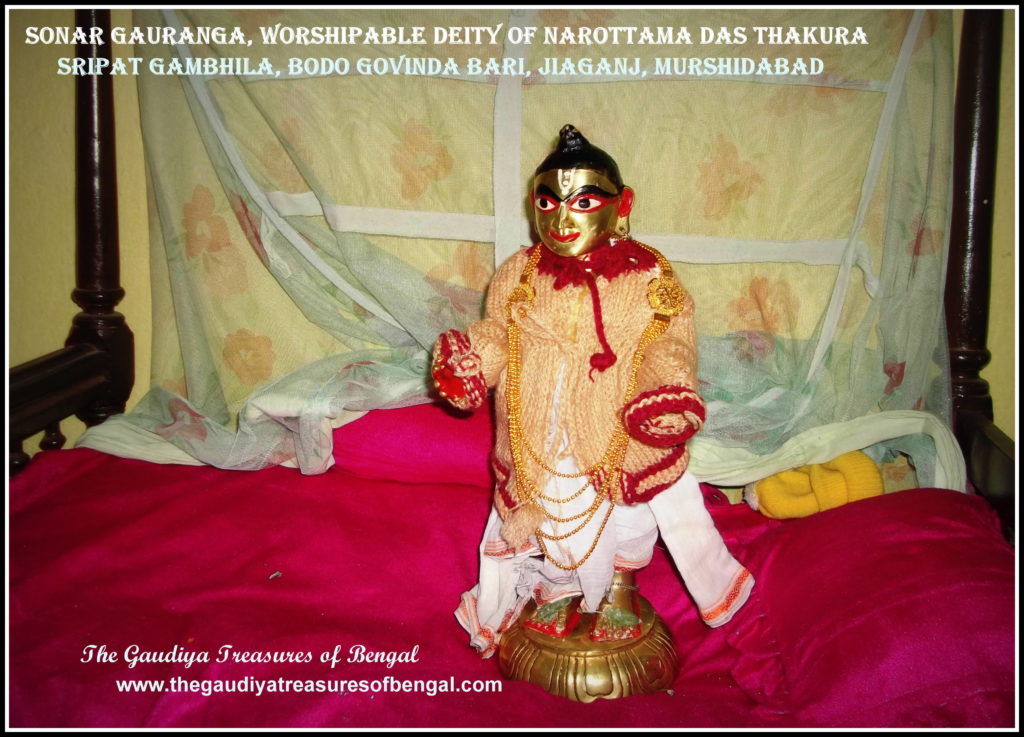 The immensely fortunate puppy that attained the association of Lord Gauranga, developed transcendental knowledge. Singing the holy names of Radha, Krishna, and Govinda, it began dancing in ecstasy. The people of Nadiya pursued the dog, which manifested the highest symptoms of transcendence. The puppy’s hairs stood on its ends and its eyes remained filled with tears of divine love. All of a sudden, the fortunate soul abandoned the body of the dog and departed for the spiritual realm of Goloka. A celestial chariot appeared to carry the soul to its destination.

–
The golden airplane was adorned with jewels, pearls and it was as effulgent as the thousand rays of the sun. It echoed the vibrations of millions of bells and host of Kartalas.
Hearing the sound of conch-shell, the chants of ‘Jaya’ and the holy name of Lord Hari, the Gandharvas and Kinnaras began singing the glories of Sri Radha and Krishna.

Various flags graced the top of the chariot, which eclipsed the effulgence of the sun. The charming and attractive soul was seated at the heart of the chariot upon a throne embedded with precious stones. Celestial beauty decorated every part of his blissful body, that could put millions of cupids to shame. His coolness mirrored that of millions of moons. He incessantly chanted the Holy Names of Radha-Krishna and Gauranga. The Siddhas fanned him with camara whisks as he soared back to Goloka. Brahma, Shiva, Sanaka, and other demigods surrounded the chariot and sang praises of Lord Gauranga. They exclaimed how they had never observed such magnanimous pastimes before.

Jaya jaya agatira gati Gaurahari
jaya jaya avatara sabara upori
tor karunay kali jiva nistariba
ara kiba leela tor aloukika haba
mor saba deho kabe habe bhagyavan
paiba tomara pada-prasada pradhana
kukkura toriya yay tomara parashe
emon karuna kabhu nahi Hrishikeshe
(Chaitanya Mangala, Adi, 2.339-342)
–
All glories, all glories to Lord Gaurahari, the shelter of the shelterless, the best of all incarnations.
By Your mercy the souls of Kali Yuga shall be delivered. What more wonderful pastimes will You reveal in the future?
When will our bodies attain the same fortune and receive the mercy of Your lotus feet?
Simply by Your touch, even a dog has attained salvation. We have not witnessed such mercy even in the pastimes of Lord Krishna (Hrishikesha).