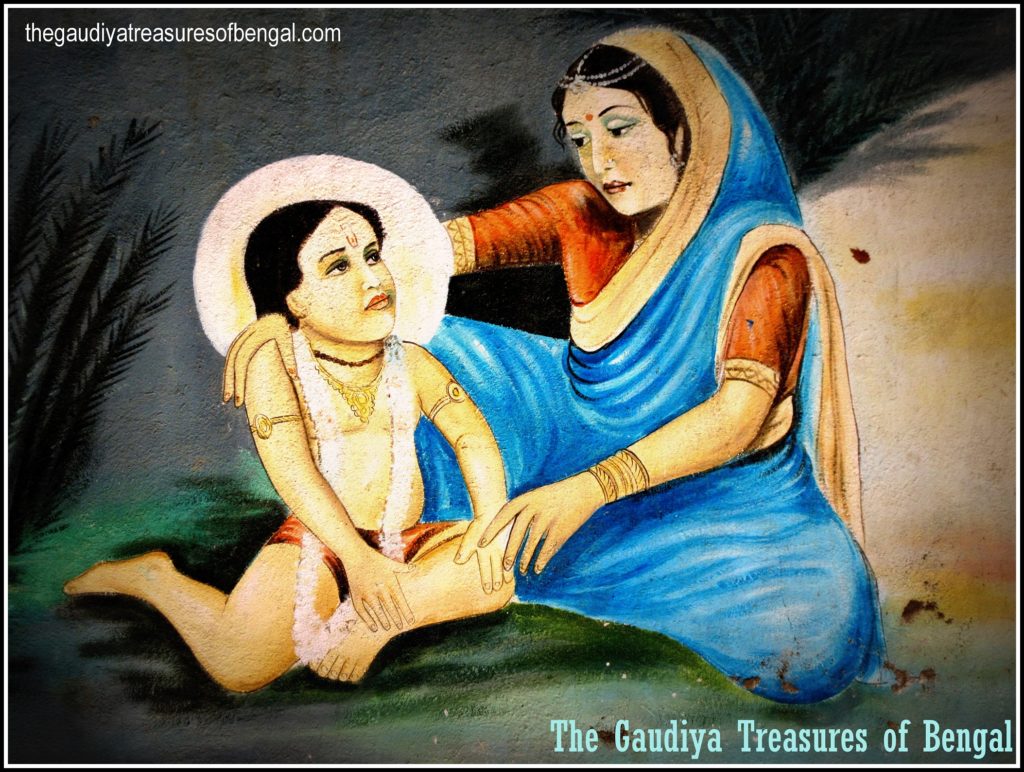 ‘The Gaudiya Treasures of Bengal’ proudly presents to you the Mischievous pastimes enacted by Nimai of Nadia. In the second article of this series, we shall endeavor to recite the naughty playful pastimes of Lord Viswambhara where He taunts and teases His friends, His family and the other residents of Navadvipa.

Sri Chaitanya Mangala recites an enchanting pastime concerning Sri Saci devi’s desire to perform Sashti Puja along with the neighborhood ladies. Accordingly, she gathered the required paraphernalia and the foodstuffs for the worship. It is worthwhile mentioning at this point that Sashti is a demigoddess who protects the children and hence it is a common practice in Bengal that mothers pray to her for their child’s safety. Covering the puja paraphernalia with the end of her saree, Saci Mata proceeded towards the banyan tree where these were to be subsequently offered. Just then, Nimai, who was playing nearby, came over to see what His mother was carrying. Nimai opened His arms and obstructed Saci devi’s way. Little Nimai was impatient to know what His mother was carrying. Saci devi then explained to Him that she was taking foodstuffs to be offered unto mother Sashti and directed Nimai to play over there until she returned. She also assured Nimai of sweets (Sandesh) and bananas upon her return. She added that she would plead for the boon that Nimai gets relieved from all afflictions and inauspiciousness.

Hearing His mother’s words and understanding her heart, Lord Gaurahari, the reservoir of endless nectarine beauty, replied, ‘Mother! I tell you repeatedly but you do not follow. I am suffering from great difficulty right now. My belly is burning with hunger !’. Saying this, the Lord snatched away the sweets kept for the worship and popped them into His mouth. With tearful eyes, mother Saci sighed heavily and was stuffed with grief seeing her son’s mischievous act. She rebuked Nimai, calling Him an ignorant fool who does not have any respect even for the Gods. ‘Even being the son of a brahmana, you are so disobedient. I feel like giving up my body’, Saci Mata lamented. 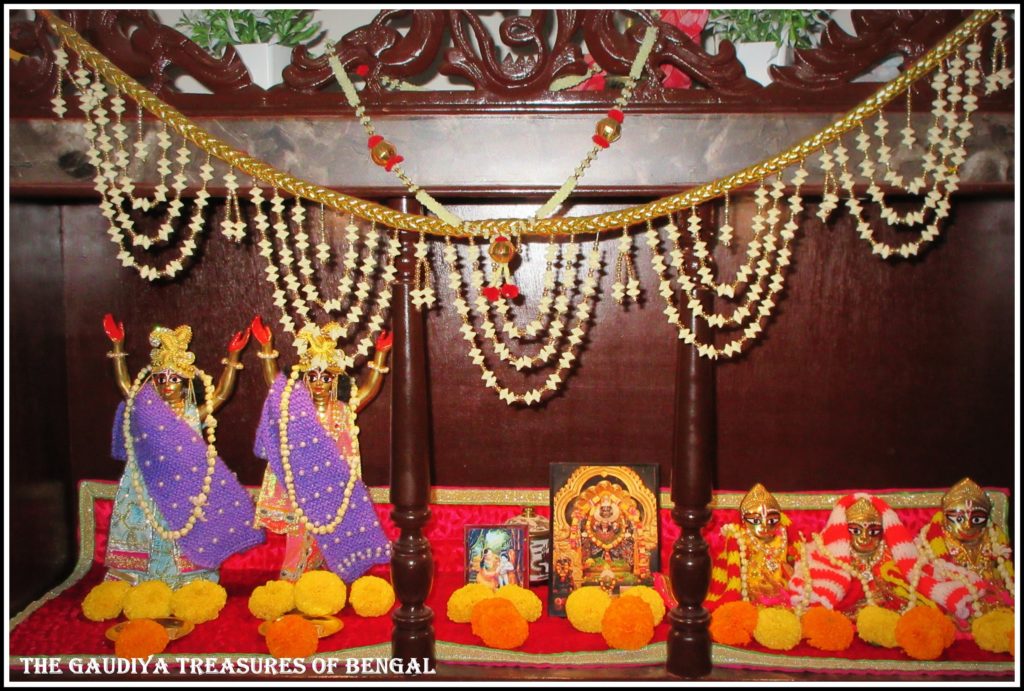 His mother’s words made Him very angry and Nimai then retorted ,’Mother ! you are chastising Me, not understanding anything. I know everything and I am the very essence of the three worlds (earth, heaven and hell). I am one without a second as no one is equal to Me. Just as pouring water onto the roots satisfies the whole tree, similarly by worshiping Me alone perfects one’s whole life’.

Saying this the Lord very cleverly embraced Saci Mata flooding her with motherly affection. Saci Mata proceeded to worship Goddess Sashti. She bowed down and humbly begged mother Sashti to overlook the offenses of an unyielding and a defiant Nimai. She prayed that no calamity befalls Nimai as He was her only treasure. She pleaded that Nimai grows gentle and peaceful and prayed for His long life.

As a child, Lord Gaurahari would go to the residences of His neighbors, steal their eatables and eat them. All the other children lodged complaints with Saci Mata about how Nimai beat them up and steal from His neighborhood. Saci devi would chastise Nimai and rebuke Him for His unruly behavior. This would in turn outrage the Lord. He would then run inside a room in His house and break all the pots within it.

Nimai was an exceedingly intelligent student who could grasp His teacher, Gangadas Pandita’s words, just by hearing them once. The other students became His followers simply by attending to His clever arguments. Navadvipa, being the seat of learning in those days, was full of educators. All of their students gathered in the Ganges after class and quarreled with each other. Nimai proceeded from one bathing Ghat to another, trying to find an audience of students with whom He could debate and argue. On one such occasion, the advanced students of Navadvipa challenged Nimai into a discussion. The students challenged Lord Viswambhara to explain the rules governing verbal roots. The Lord explained very authoritatively hearing which the students hailed Him. Nimai then presented a second set of arguments that refuted His first explanation. This astounded all present. When the students were praising Him, He then went ahead to present a third set of arguments that contradicted the previous two. This overwhelmed all the students who embraced Him sincerely. 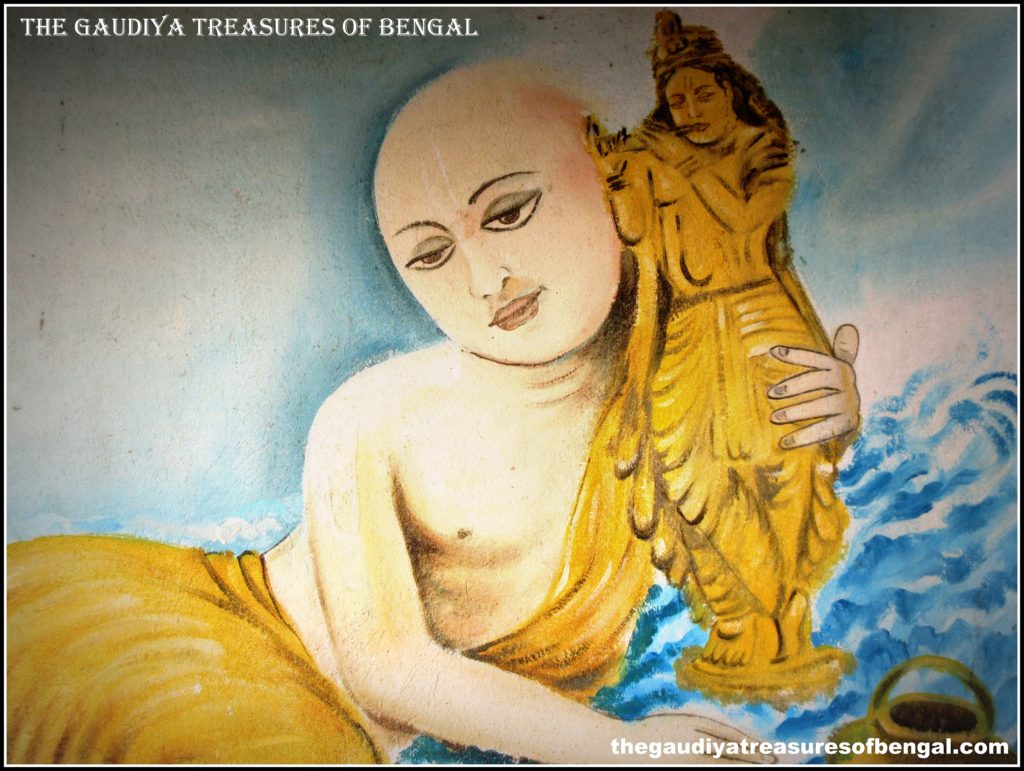 The Vaishnavas, who engaged themselves in relishing the transcendental pastimes of the Supreme Lord, did not want to misuse their time needlessly discussing dry logic and Sanskrit grammar. Most of them hence avoided meeting Nimai Pandita fearing that He would draw them into intellectual arguments. Such discussions usually resulted in Nimai defeating and making fun of the devotees. On one such instance, Lord Viswambhara caught hold of Mukunda and dared him to a debate. Mukunda decided to teach Nimai a good lesson so that He does not dare taunt him again. Knowing Nimai was well versed with Grammar, Mukunda decided to discuss on alankar (figures of speech) instead. Mukunda said ’Grammar (Vyakaran) is a subject of discussion for children. Let us discuss on alankar (figures of speech) instead’. Lord Viswambhara agreed. An intense debate ensued. The Supreme Lord Nimai Pandita laid to dust all the quarrels of Mukunda. The Lord pointed out blunders with each and every statement that Mukunda made. Being embarrassed Mukunda became speechless. The Lord smilingly advised Mukunda to return home and study his books properly. If Mukunda liked then they could debate again the following day. Mukunda took the dust from the Lord’s lotus feet and left for the day. While returning he considered that Nimai cannot possibly be an ordinary human being. It was not possible for a mere human to possess so much knowledge. There is not a single thing that He did not know. Mukunda wished that if Nimai had been a devotee of Krishna, he would never leave His association for a moment.

On another occasion, Lord Viswambhara grabbed Gadadhara Pandita and confronted Him to explain the symptoms of liberation. Gadadhara Pandita responded with whatever He had learned from the scriptures. Nimai, however, termed them as inaccurate. Gadadhara pointed out that liberation is only obtained after the execution of endless austerities. Lord Chaitanya, the husband of Sarasvati, however, could not be defeated in a debate. He pointed out several flaws with Gadadhara Pandita’s explanation. Nimai advised Gadadhara to return home adding that He would give Him another chance the following day. Gadadhara was relieved to escape Mahaprabhu and departed quickly. In this way, Lord Gaurahari taunted His associates and engaged in mischievous pastimes. Everyone, including the devotees, identified Nimai as a learned scholar and approached Him with reverence. The devotees hoped that Nimai would soon develop attachment unto the lotus feet of Lord Krishna. 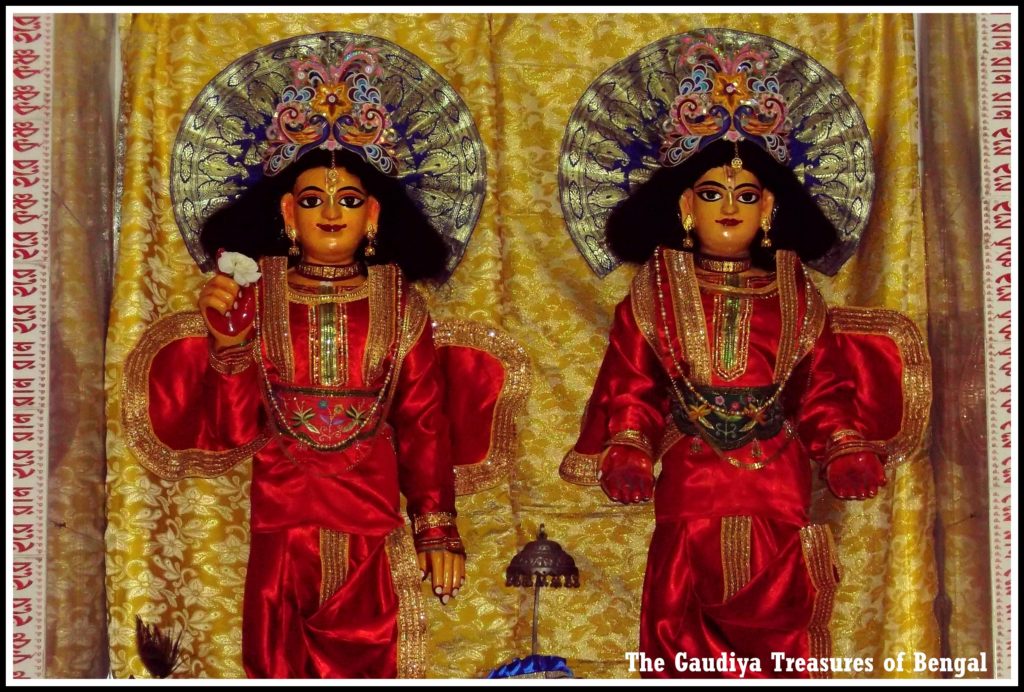 Nimai Pandita conducted debates at Gangadasa’s house. If anyone decided to learn the scriptures He would taunt him challenging,’ Who is this? Can this great scholar refute my arguments ?” He would tease Murari Gupta stating,’ You are a physician (vaidya)? Why are you studying here? Go to your leaves and herbs and produce medicines to heal the sick’. Though Murari Gupta, was a partial expansion of Shiva, yet He used to always keep calm and tolerate Nimai’s taunts. Once a debate ensued between Nimai and Murari Gupta. Nimai was very pleased with Murari and empowered him to present excellent arguments. At last, Mahaprabhu accepted defeat. When Nimai kept His soft lotus hands upon Murari thereby blessing him, Murari Gupta felt a surge of transcendental bliss. Murari Gupta then considered that Nimai could not be an ordinary human being. His scholarly prowess is unparalleled and inconceivable. He thought, ‘Simply by His touch, my whole body has now become ecstatic. There is no shame in accepting Him as my teacher. There is no one as intelligent as Him in the whole of Navadvipa’. 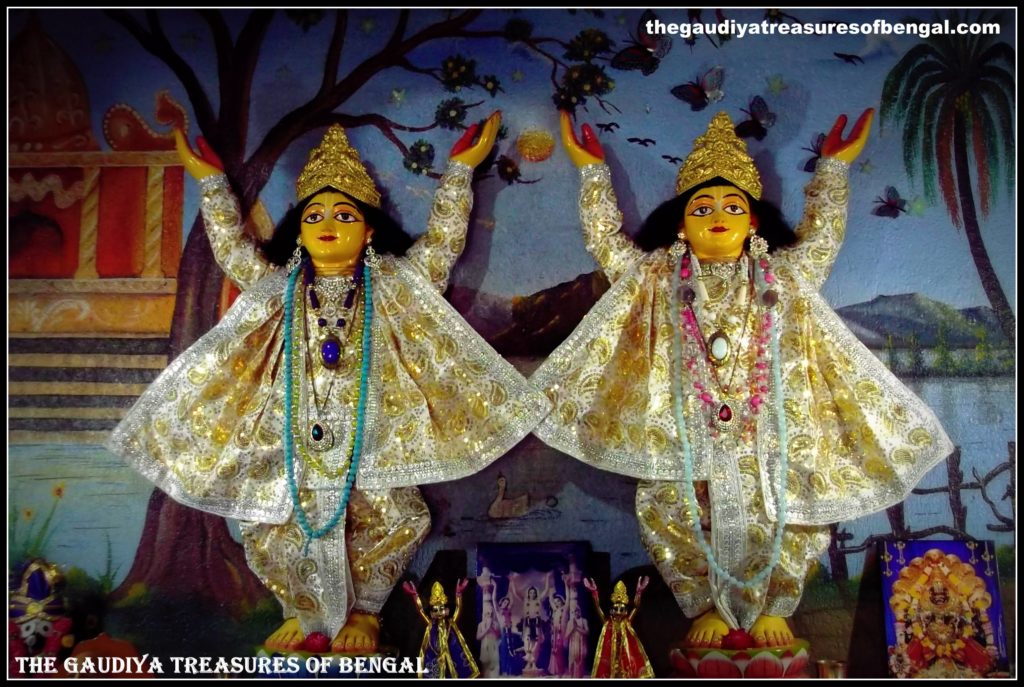 Another very interesting pastime enacted by Lord Gaurahari was that He used to mock the accent of those who had hailed from Srihatta (Sylhet). Numerous associates of Lord Gaurahari had hailed from Sylhet (Sri Advaita Acharya, Murari Gupta, Srivasa Pandita, etc to mention a few). Even today, Sylheti Bengali is quite distinct from the standard Bengali dialect. The Sylhetis are known to speak Bengali in a very unusual accent. Though Mahaprabhu’s parents, Sri Jagannatha Misra and Saci devi, had hailed from Sylhet (refer- ‘Dhaka Dakshin – Jagannatha Misra’s ancestral home in Sylhet (Bangladesh)’), yet the Lord derived a lot of pleasure from teasing the residents of Srihatta. This infuriated these citizens and they reminded the Lord that He and His own ancestors have also hailed from Sylhet.’ Being a son of the residents of Sylhet, how can You ridicule our accent? what is the reasoning behind this ?’, they used to ask.

But their words could not discourage the Lord who continued mocking them. Some of them even chased Him and dragged Him to the court of the local magistrate. Nimai’s friends would reach there in time to appease the angry crowd and reach some sort of agreement. In this way, Nimai Pandita enacted His naughty playful pastimes with His beloved inhabitants of Navadvipa. We leave you with a wonderful composition by Srila Vrindavana das Thakura wherein he sings the praises of the captivating charm of Lord Gauranga and prays so that he may forever contemplate upon His glorious never-ending pastimes.

All glories to Lord GauraChandra.He is the supreme controller of all other isvaras (controllers) and the most treasured love of Lord Nityananda.He possesses an eternal transcendental form. O Lord, You are the master of the gatekeepers of the spiritual world.
O Lord, mercifully gaze upon the conditioned living souls.
All glories unto You, the son of Sri Jagannatha Misra, for You are the best of the brahmanas.
All glories unto Your devotees.
You are an ocean of kindness, and Your beautiful eyes are just like lotus petals. Be so kind, O Lord, as to grant me this prayer: May I remain forever absorbed in Your never-ending glories.