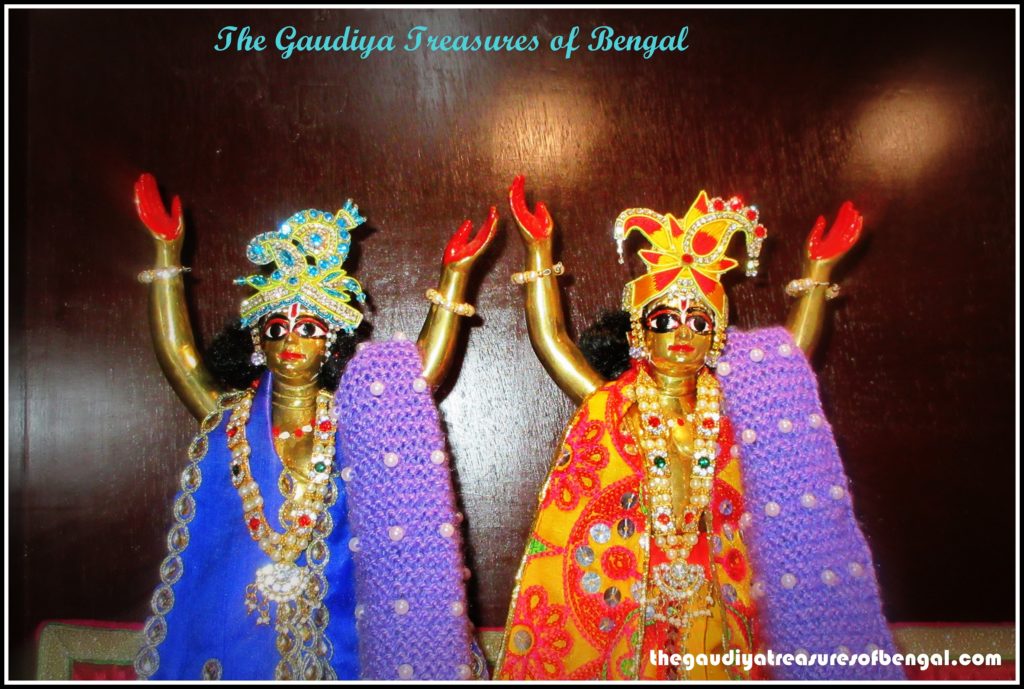 ‘The Gaudiya Treasures of Bengal’ proudly presents to you the Mischievous pastimes enacted by Nimai of Nadia. In the first article of this series, we shall try to describe the enchanting pastimes of Lord Gaurahari on the bank of mother Ganges. As Lord Vishwambhara grew up, He absorbed Himself in the restless mood of a young boy and engaged Himself in manifesting mischievous pastimes with other young brahmana boys of Navadvipa. Little Nimai could not be restrained. He would taunt other boys and pick up fights with them. He would always win a quarrel as He was more powerful than anyone else. The coverings of dust and spots of ink seemed to enhance the beauty of Little Nimai’s golden effulgent form. Every day after finishing His studies at noon, Nimai would go and happily bathe in the holy Ganges. Countless people, including householders, sannyasis, distinguished gentlemen and children would accompany the Lord in these water pastimes. The young boys splashed water towards each other. Who can estimate the endless fortune of these people? Mahaprabhu would sometimes float, sometimes swim inside the water and engage in numerous sporting activities. The water that washed the lotus feet of Lord Gaurahari, the supreme personality of Godhead, would touch the body of these supremely fortunate people of Navadvipa.

No one could catch Nimai, as He was the swiftest swimmer. Many warned Him to stop His mischief but He would not pay heed to any of these. He would contaminate the brahmanas  after they had completed their bathing, by touching them or spitting on them, thereby forcing them to bathe again. When some of the brahmanas meditated standing in the Ganges, Nimai would splash water on them and ask them who they were meditating upon. He would then argue that He was Narayana Himself and suggested that they should meditate upon Him instead. He would steal their clothes while they bathed in the river. Some of these people, complained to Sri Jagannatha Misra, Nimai’s father, about his son’s naughtiness. Some complained that Nimai stole their Shiva Linga while some narrated how Nimai ate all of their offerings that had been kept for worshiping Lord Vishnu. Nimai used to justify this explaining that the Supreme Lord had directly eaten their offerings and hence they should be happy. 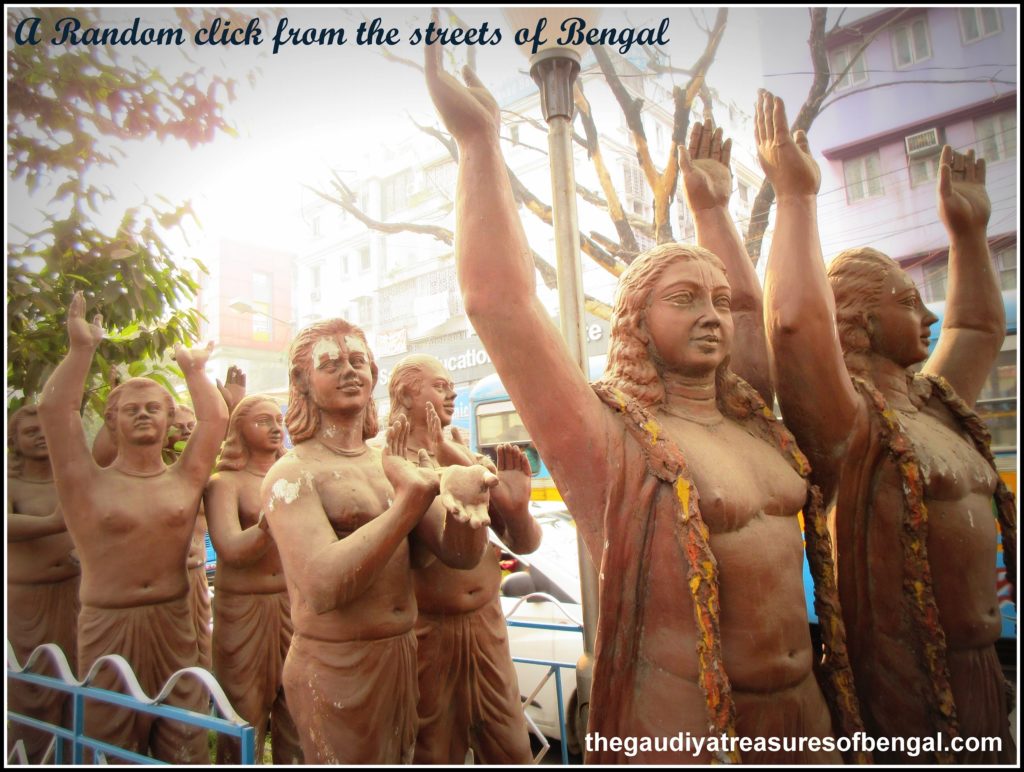 Some complained that when they stepped into the river to recite the Gayatri mantra, Nimai would swim underneath the water and pull their legs, carrying them away. Some said that Nimai stole their Bhagavad Gita while some complained that Nimai had stolen their flowers. One of them lamented how Nimai put water into the ears of his young son making him cry terribly. Few complained about how Nimai would climb upon their shoulders and shout,’I am Mahesh’. Thereafter He would jump and run away. Little Nimai would replace men’s clothes with women’s clothes and vice-versa, while they bathed in the Ganges, thereby causing them much embarrassment.

Similarly, the young girls of Navadvipa made related complaints to Saci mata about her son’s mischievous behavior. They complained about how He used to steal their clothes and abuse them with strong words. He also threw Okada seeds on their hairs which could not be removed very easily. Another girl complained about how Nimai said that Ne wanted to marry her. In Chaitanya Charitamrita, it is described how Lord Viswambhara would taunt the girls at the Ganges while they engaged in their ritualistic worship of different demigods. Nimai would demand that they worship Him instead so that they could achieve good handsome spouses. He would seize the paraphernalia and offerings meant for demigod worship, smear His own body with sandalwood pulp and eat any sweetmeats, rice or bananas kept over there. Being satisfied He would bless the girls saying, ‘Your husband shall be learned, clever, young and possess abundant wealth. You shall have seven sons who will be blessed with long life and good intelligence’. The girls would be very pleased hearing this benediction, but superficially they would feign anger. If any girl refused to give in to Nimai’s demands, however, He would threaten them with old husbands and at least four co-wives. No one would want to take this risk, however, fearing that Nimai’s curse might come to be true. In this way, Lord Vishwambhara enacted His playful pastimes with these girls.

In this way, all of them expressed their grievances to Saci mata and Jagannatha Misra. However, all of these residents of Navadvipa, regardless of how much they suffered, they derived great pleasure from Nimai’s presence and loved Him greatly.

So when they learned that Jagannatha Misra was fuming with rage and was coming in search of his son, they warned Nimai of the impending danger and suggested Him to run away. Accordingly, Sri Gaurahari ran to His home taking a different path. When Jagannatha Misra came to the bathing ghat, Nimai’s friends explained that Nimai had not come to bathe that day and had returned home directly from class. And those who had previously complained about Nimai, now expressed that their complaints were not to be taken very seriously and that they were made just for fun. These people of Navadvipa were eternal associates of the Supreme Lord and had descended to assist Him in His blissful pastimes. They were endowed with superior intelligence. Hence they exclaimed that there was no one else as supremely fortunate as Sri Jagannatha Misra as the supreme Lord has chosen him to be His father. Wherever Nimai stays, the people are not afflicted with hunger, thirst or grief. They added that Jagannatha Misra and his family members had the great fortune of serving the lotus feet of Lord Viswambhara. ‘We shall always treasure Nimai’s memory in our hearts, even if He commits countless offenses’, they added.

Jagannatha Misra and Saci Mata were amazed to see Nimai return home with marks of dust and ink blots all over His blissful body. There were no signs that He had been bathing in the Ganges. Holding books in His hands, Viswambhara resembled just like the moon. Arriving home, Nimai asked for some oil as He required to go for a bath. When little Nimai climbed upon Jagannatha Misra’s lap, Sri Jagannatha Misra immediately gave up his rage, forgot all worldly perceptions and grew swollen with ecstasy, simply by seeing His son.

On being questioned, Nimai vehemently denied all the allegations against Him. Smiling, He took permission from His parents this time and went to bathe in the Ganges yet again. When He reached the river, His friends embraced Him and praised Him for His intelligence and quick wits. Giggling they said, ‘You are very clever! You saved Yourself from a good beating today !’. 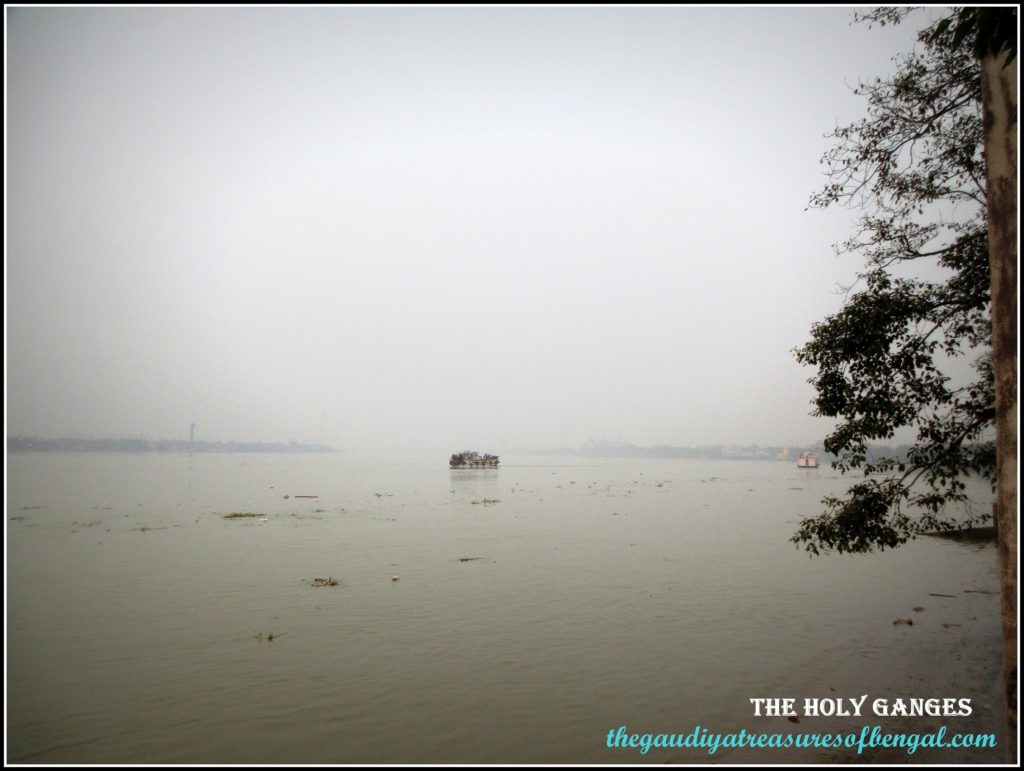 Back at home, Jagannatha Misra and Saci devi considered that the complaints concerning Nimai, could not be all false. But on the other hand, Nimai had come home wearing the same dry clothes that He wore in the morning, His hairs were dry and not disheveled. He had dust smeared all over His body. There was no indication that He had been bathing in the Ganges. They speculated that Nimai was perhaps not a mere human. ‘He must be Lord Krishna Himself, who has appeared in our home concealing His supreme identity. Or perhaps He is some glorious saintly person. I really cannot understand’, Jagannatha Misra asserted. But all of their deep considerations faded as soon as they saw the blissful face of their little son. All of these insights would then be replaced with loving warm affections for Nimai. The couple of hours that Nimai went out to study, seemed just like two yugas to Jagannatha Misra and Saci devi, who could not bear any separation from their beloved son. The Vedas would be at a loss to define the fortunes of Jagannatha Misra and Saci Mata, even if it were to do so in a million ways and with a million mouths. 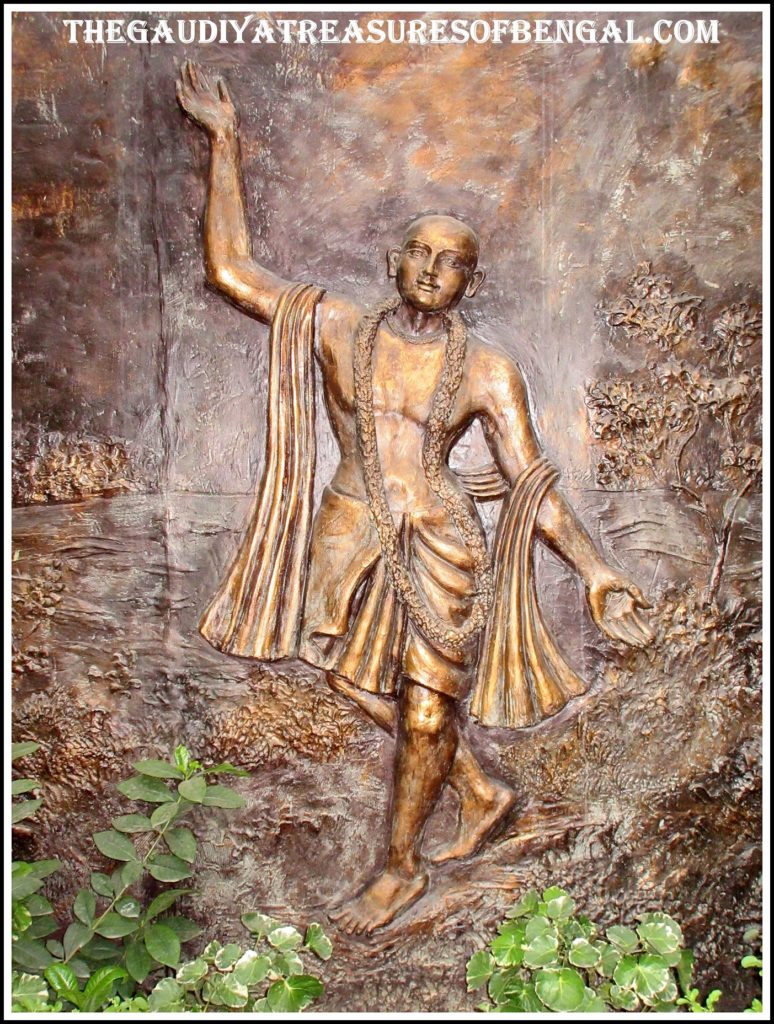