END_OF_DOCUMENT_TOKEN_TO_BE_REPLACED

North of Prithu Kunda is the town of Mathura and Sashti-tirtha, which are exceedingly beautiful and which lie within the forest of Madhuvan (in Vraja). It is very populous and full of grand residences. May my eyes become purified beholding this exalted place.

Traveling North of Prithu Kunda we reach the residence of Chand Kazi, who was none other than the incarnation of King Kamsa, Krishna’s maternal uncle. But unlike Dvapara Yuga, where Lord Krishna killed Kamsa, Lord Chaitanya delivered Chand Kazi by bestowing His causeless mercy upon him and transforming him into a devotee. This is a vital difference between Krishna’s and Mahaprabhu’s pastimes. Lord Gauranga kills the sin and not the sinner. Thus the offenders in Lord Gauranga’s pastimes do not receive the despicable impersonal liberation (sayujya mukti) like in Krishna’s pastimes but instead, they are blessed with pure love of God.  That is why Lord Gauranga’s pastimes are considered to be the highest. This place, where the residence of Chand Kazi is located is non-different to the land of Mathura.

Previously when the demigods learnt that Mahaprabhu was about to descend in Navadvipa, Vishwakarma (chief architect of the demigods) came down to Nadia and witnessed that it would be hard to get water on the roads where the Lord would do kirtana in the future. So one night he dug out sixty (Sasthi) wide ponds, the last being at the Kazi’s village. Just beside the residence of Kolavecha Sridhara, we can see even today the remains of a dug out, surrounded by raised edges. This was one of these sixty ponds that were dug out by Vishwakarma.

Translation –
There is a lovely hill known as Bharadvaja Tila, which is beautiful to behold. It was here that Bharadvaja muni had worshipped and meditated upon Lord Gauranga hankering for His divine ecstatic love. Upon receiving it, the sage composed scriptural verses that were instrumental in bestowing the gift of divine love upon thousands of averse souls.

How to Reach : This place is not very far from the birthplace of Lord Gauranga at Yogpeeth, in Mayapur. Infact one can walk for a few minutes from Yogpeeth to reach Bharadvaja tila. One has to take the small village road ,next to the Sridham mayapur sub post office, to reach here. Bharadvaja Tila is situated adjacent to the Jagai Madhai Ghat. 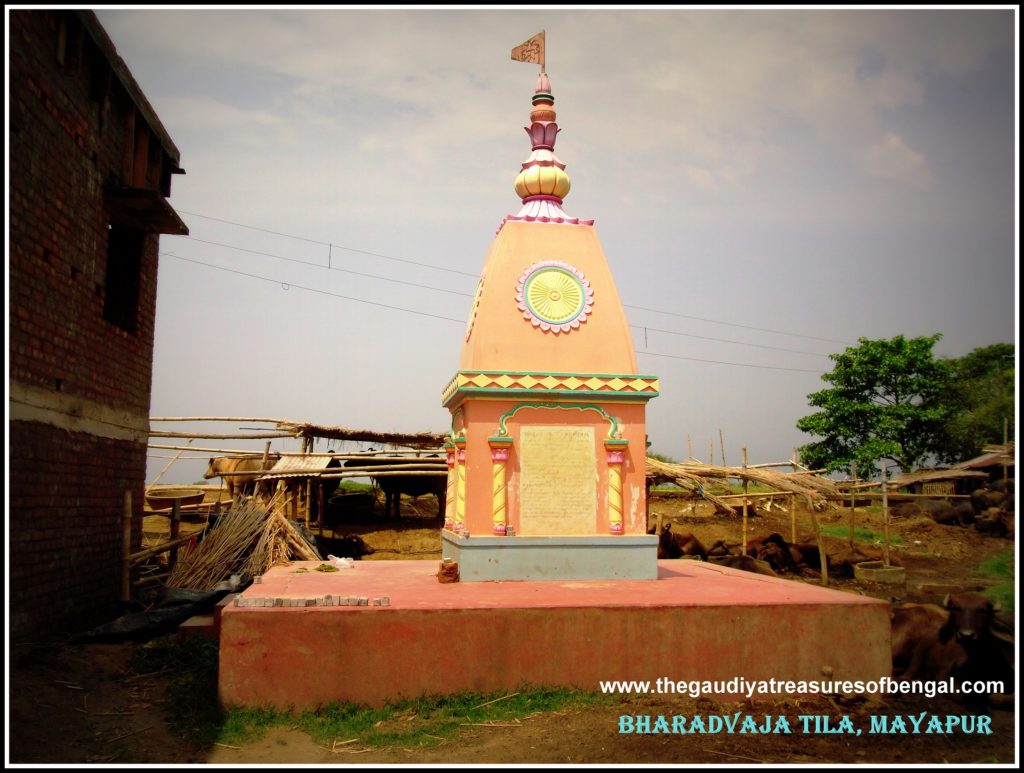 Translation –
To the west ,on the bank of river Ganges, lies the famous village of Ganga Nagara. It was here at the house of Gangadasa Pandita, that Lord Gauranga studied along with His young brahmana friends.

Purport –
Ganga Nagara lies on the borders of Antardvipa and this town was founded by King Bhagiratha of the Raghu dynasty. King Bhagiratha, by dint of his severe penances, had caused the descent of mother Ganges from the heavens to the earth. This is why mother Ganga is sometimes also referred to as Bhagirathi. King Bhagiratha had caused Ganga to descend to this world in order to perform the Shraddha (last rites) of his ancestors. Anyways, King Bhagiratha blew his conch shell and went ahead to show the way, while mother Ganga followed him. But when they reached Navadvipa dham, mother Ganga stopped flowing. Bhagiratha turned back to see that Ganga devi had stopped flowing onward. Bhagiratha became fearful and meditated to learn the reason for this. Being satisfied, Maa Ganga revealed that Navadvipa was the eternal abode of He, from whose feet she had emanated. It was the month of Magha and she wanted to reside there in the dham till Phalguna Purnima. She added that all her desires would become fulfilled in Navadvipa mandala. Maa Ganga revealed that Phalguna Purnima was the appearance day of Her Lord (Lord Gauranga) and she would observe a vow on that day. She reassured Bhagiratha that she would again start flowing after Phalguna Purnima. Thus King Bhagiratha stayed there in the town Ganga Nagara till Phalguna Purnima and continued on his journey thereafter.
Lord Nityananda had revealed to Jiva Goswami that anyone who stays in Ganganagara on Phalguna Purnima , fasts, bathes in the Ganges and worships Lord Gauranga, shall surely attain the spiritual world along with thousands of His ancestors, after he leaves his body, irrespective of where he passes away.

How to Reach : It is believed that Ganganagara was located in the open fields next to the Sridham mayapur sub post office. The Ganges used to flow by this place 500 years ago. This locality is now known as ‘Ghosh para’. 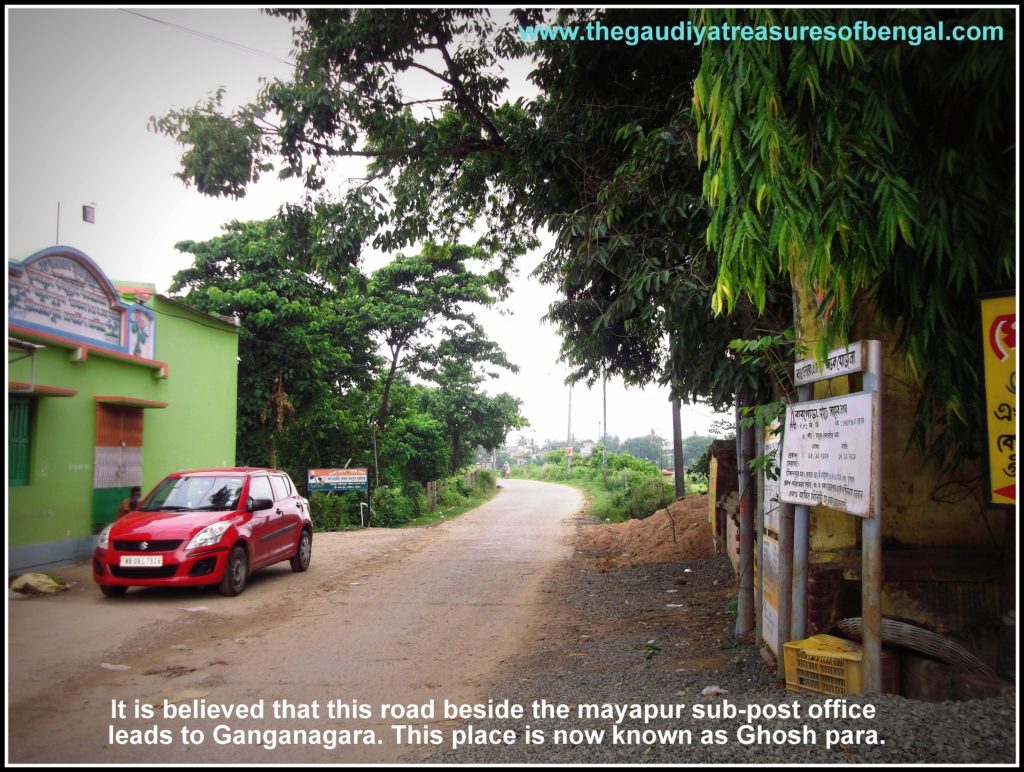 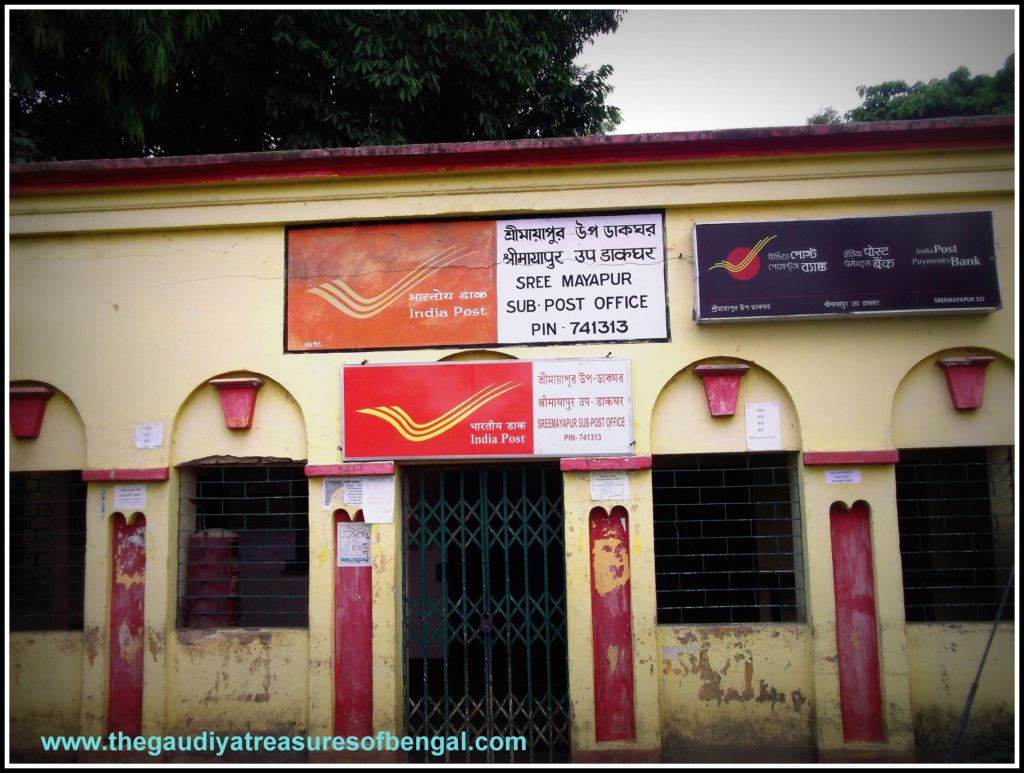 END_OF_DOCUMENT_TOKEN_TO_BE_REPLACED

Translation –
The scriptures sing praises of a transcendental abode, called Brahmapura.Ah ! Mayapur shines bright in that realm, before eyes free from illusion.Identical with the most exalted abode of Gokula, situated in the Mahavana forest of Vrindavana, Mayapur is the abode where the son of mother Saci, performs His eternal pastimes.

END_OF_DOCUMENT_TOKEN_TO_BE_REPLACED

Translation –
The dham resembles an eight petalled lotus and is exceedingly pure. It is so soothing that it defeats the pleasant rays of millions of moons.It is more effulgent and brilliant than the rays of millions of suns. When will this dham appear before my eyes ?

“Crossing the viraja river and the brahman effulgence, beyond the Vaikuntha planets, one comes to Svetadvipa, Sri Goloka.Going further, one reaches, Gokula Vrindavana or Krishnaloka. In Krishnaloka, there exists two states of emotion – madhurya (sweetness) and audarya (munificence). Audarya exists in fullness within madhurya and madhurya exists in fullness within audarya.However, that part of Krishnaloka, where madhurya is predominant, is known as Vrindavana, whereas that portion where audarya is predominant is known as Navadvipa.There is no difference between Vrindavana and Navadvipa. Only the different manifestation of rasas (mellows) make them distinct. Navadvipa is eternal, spiritual and unlimited.
Navadvipa extends over sixteen krosas.Within the sixteen krosas of Navadvipa, which are non different from Vrindavana, there are nine islands, which form an eight-petaled lotus floating on water.In the middle of the eight petals lies Antardvipa. And within Antardvipa, lies the very central point, Mayapur. The eternal pastimes of the Lord take place within Yogpeeth (His birthplace) and the circle of Mayapur, the circumference of which measure three and a half miles and the diameter measure just over one mile. Yogpeeth, the birthplace of Sri Chaitanya Mahaprabhu, is the most glorious of all places”.

Translation –
At the center of these eight islands ,which resemble just like eight petals, is the very best of the islands. The name of this extremely beautiful (ninth) island is Antardvipa. At the center of Antardvipa resides Yogpeeth and Mayapur. I shall derive immense bliss taking darsana of this exalted place.
END_OF_DOCUMENT_TOKEN_TO_BE_REPLACED

Translation –
May the crown jewel of all the holy places of pilgrimage, which is the playground of the Lord’s sandhini potency (the energy of eternal existence), which measures sixteen krosas in circumference and is the residence of the Lord’s cit (knowledge) and ananda (bliss) potencies, which is the seat of all the other holy places of pilgrimage, and is the resting place for all demigods, sages and scriptures – May this holy dham of Navadvipa manifest before my eyes.

Purport –
Navadvipa is the crown jewels of all Pilgrimages. As Srila Bhaktivinoda Thakura explains in this verse, the realm of Navadvipa is eternal and is the residence of all the potencies of the Supreme Lord, namely sat (eternal), cit (cognizance) and Ananda (bliss). All the holy places of pilgrimage and various demigods reside within Navadvipa. At Harihara kshetra, for example, Lord Shiva and His wife Gauri eternally worship Lord Gauranga and deliver the fallen souls chanting ‘Gauranga’ mantra in their ears. At Uchcha-hatta, the sankirtana of the demigods glorifying Sri Chaitanya Mahaprabhu can be overheard even today. However, Navadvipa, is the most exalted of all places, because herein lies Yogpeeth, the birthplace of the Lord Chaitanya, the Supreme Master of all.

END_OF_DOCUMENT_TOKEN_TO_BE_REPLACED

Sri Navadvipa Bhava Taranga has been originally composed by Sri Saccidananda Bhaktivinoda Thakura, who is an intimate associate of Lord Gauranga (Gaura Shakti Svarupa). We are exceedingly honored and feel ourselves blessed to have been able to translate this book in English and present it ‘as it is’ for the pleasure of the devotees. Let us take this opportunity to pen a few lines in glorification of Navadvipa. There is no difference between Navadvipa , the supreme abode of Lord Gauranga and Vrindavana, the supreme abode of Lord Krishna. Infact Lord Krishna and Lord Gauranga are one and the same person and there is no difference between them (yei Gaura sei Krishna sei Jagannatha). The sweetness (madhurya) that characterises the pastimes of Lord Krishna and the munificence (audarya) that characterises the pastimes of Lord Chaitanya are both the highest manifestations of spiritual ecstasies.

When asked to describe the transcendental abode of Navadvipa, Lord Nityananda had the following to say :

END_OF_DOCUMENT_TOKEN_TO_BE_REPLACED 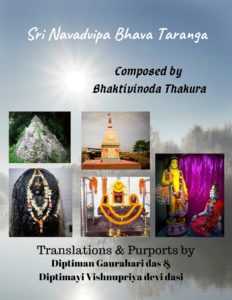