Return to the Table of Contents for this Book 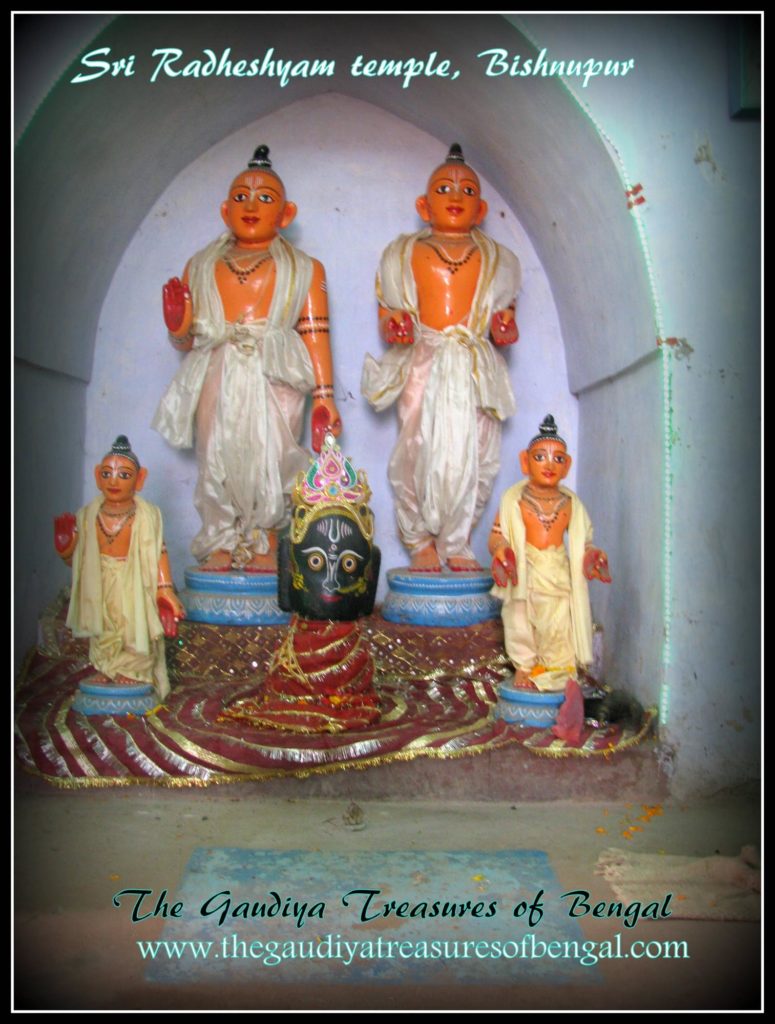 O son of Kunti, this material nature is working under My direction, and it is producing all moving and unmoving beings accordingly. By its rule this manifestation is created and annihilated again and again.

Mahamaya (devi Durga) is the manifestation of Lord’s external energy. The jivas or living entities fall under the Lord’s marginal energy. And Srimati Radharani is the manifestation of the Lord’s internal energy. The living entities have their free will and independence to either choose to be devoted to the Supreme Lord and enjoy ultimate happiness or be devoted to their own senses and enjoy flickering happiness along with a lot of pain. Those seeking shelter of the Lord are protected by the Lord’s internal energy. But those beings who want to become God themselves and enjoy independently, come under the jurisdiction of the Lord’s external energy or Mahamaya devi. It is Mahamaya devi’s service to provide tritapa dukha (threefold miseries) unto these beings and make them ultimately realize their mistake. So devi Durga, who is in charge of this material world, is actually responsible for making living beings devoted to the supreme Lord. She is a vaishnavi and works under the direct supervision of Lord Hari.

Translation –
(Lord Narayana continued) ‘You are my adya-shakti (primeval potency), you understand the science of devotion.You are my material energy personified. I am not without you. Without you, the material creation cannot exist. Whatever you just did is all your mercy’.

Translation –
(Lord Narayana continued) ‘The whole world knows Me through the worship of Shiva and Gauri, knowing the two of you to be My very self. When you become pleased at heart, you remove the misconception that Shiva and you are different from Me’.

Purport-
When Lord Shiva and Devi Durga are especially pleased with someone, they reveal to them that they are the servants of the supreme Lord and encourage them to worship the Supreme Lord Hari with love and devotion. This happened in the life of a great vaishnava named Govinda Kaviraja. He was a great devotee of Maa Durga. Goddess Durga revealed to him in his dream one day, to seek shelter of Lord Hari, the supreme Lord and her worshipable master.Govinda kaviraja followed the instructions and went onto become a great vaishnava. He accepted initiation from Srinivasa acharya. Govinda Kaviraja composed numerous heart melting vaishnava bhajans like ‘Bhajahu Re Mana’, etc.

Translation –
(Lord Narayana continued) ‘I shall uphold this promise of Yours ,of freely distributing my food remnants (Mahaprasada) to everyone in this world. The mere fragrance of my remnants shall relieve everyone of their material bondages and their strong attachment to intellectual arguments’.

Translation –
Hearing Lord Narayana’s words, Katyayani devi (Goddess Durga) spoke once more. She said, ‘If You are compassionate upon me in Your heart, then You must give Your food remnants to the living entities in these three worlds, so that they can all honour it without any obstacles’.

Translation –
Lord Narayana, who is a gem of virtues, spoke again, ‘Please listen Katyayani, I shall keep my vow. Now I’ll reveal to you an ancient secret, that shall alleviate your anxieties regarding the material world’.

Translation –
(Lord Narayana continued) ‘No one knows the actual truth behind this ancient pastime. During the churning of the milk ocean by the demigods, using mount Mandara as the churning rod and the giant snake Vasuki as their rope, a kalpa Vriksha tree was born from the friction of the churning’.

Translation –
(Lord Narayana continued) ‘This wish fulfilling tree grants any desire that one may ask for. It grants all the desires that a person harbours in his heart. Whatever wealth one asks for, he receives the same from this tree. The Kalpa Vriksha never turns down anyone’s requests’.

Translation –
(Lord Narayana continued) ‘This kalpa Vriksha, which is glorious, effulgent, and the king of trees, shines with the transcendental effulgence emanating from the body of Lord Chaitanya. Lord Chaitanya is my own form and is the embodiment of causeless mercy.There has never ever been a form or incarnation equal to that of Sri Chaitanya Mahaprabhu’.

In the age of Kali, intelligent persons perform congregational chanting to worship the incarnation of Godhead (Gauranga) who constantly sings the holy name of Krishna. Although His complexion is not blackish, He is Krishna Himself. He is accompanied by His associates, weapons , servants, and confidential companions.

Srila Prabodhananda Sarasvati explains why Lord Gauranga is the most merciful incarnation of the Supreme :

What benefit did the world derive when the incarnations of the supreme Lord like Ramachandra, Nrsimha, and many others killed so many raksasa and Daityas ? What was the benefit derived when Lord kapila and other incarnations reveal the paths of sankhya and yoga ? Is it of great glory that Lord Brahma and other guna-avataras create, maintain and destroy the material universes ? How auspicious is it that Lord Varahadeva lifted and rescued the earth from the garbhodaka ocean ? We do not consider these pastimes to be so important. The most important of all things is that Lord Chaitanya has revealed the great splendour of pure ecstatic love for Himself. Let us glorify that Lord Chaitanya Mahaprabhu.

It is stated in Chaitanya Mangala how the pastimes of Lord Chaitanya are the most blissful and unheard of ,in any of the other yugas :

– Sri Chaitanya Mahaprabhu had manifested the most wonderful incomparable pastimes, never heard before in any of the four yugas.

The land of Navadvipa, the place where Sri Chaitanya mahaprabhu eternally enjoys His magnanimous pastimes, is saturated with audarya (magnanimity). He is the saviour of the fallen souls; that is why He is also known as patita pavana.
Along with His associates, Sri Chaitanya had manifested the most blissful , heart rending pastimes that have been ever witnessed in human history. In fact, some of the eternal associates of the Lord have experienced a greater degree of transcendental ecstasy being part of the pastimes of Lord Chaitanya, as compared to being part of Sri Krishna’s vrindavana pastimes. Lord Gaurahari freely gives what no other incarnation of the Supreme Lord has ever given before – the ecstatic pure love of God. He does not consider one’s qualifications or background or pedigree before bestowing this supreme gift upon them, receiving which one achieves the ultimate perfection of his human life .He is the essence of all the other incarnations of the Supreme – ‘Avatara sar Gaura avatara’.

That is why Sri Chaitanya Chandramrita states :

Even if watered and nourished with nectar for millions of years, a stone will not sprout a single blade of grass. Even if a dog’s tail is stretched and extended , it will never become straight. A man may stretch out his arms as much as he likes, but he will never be able to catch the moon.Similarly a person may follow the various kinds of spiritual practices for millions of lives but he will not be able to attain the pure unadulterated love of God without achieving the mercy of Lord Gauranga.

Translation –
(Lord Narayana continued) ‘He is the fountainhead of all the other incarnations of the supreme.He will appear as a sannyasi and enjoy His transcendental pastimes. I, the master of the three worlds, shall descend onto the earth as Lord Chaitanya, stay there and bestow my causeless mercy by the preaching of pure devotional service unto Myself’.

– even after chanting the holy names of Radha and Krishna for millions of years, a rogue is not able to develop any taste for Harinama. But if he lovingly worships Sri Chaitanya Mahaprabhu, his wicked mentality quickly vanishes and he soon achieves the lotus feet of Radha and Krishna in Vrindavana.

In Sri Chaitanya Bhagavata as well, it has been mentioned how Nityananda Prabhu always chants the glories and blissful pastimes of Lord Gauranga and makes all of His associates and followers do the same as well.

Translation –
(Lord Narayana continued) ‘ In this age of Kali, in order to manifest the congregational chanting of my holy names, I shall manifest myself in a human like form, bearing a complexion as splendid as gold. I shall keep your vow and preach the highest truth of love of Krishna’.

Translation –
(Lord Narayana continued) ‘Now I have revealed my heart to you. Please keep this secret carefully locked away in your heart. Lord Gauranga, who shall appear in this age of kali, is the essence of all the other incarnations of the supreme. By the strength of His transcendental qualities, He shall deliver all people in Kali Yuga’.

Purport –
This verse is very significant. Lord Narayana , the opulent form of the Supreme Lord, Himself reveals in this verse that Lord Gauranga is the essence of all the other incarnations of the Supreme (avatara sar Gaura avatara). We have read previously how Narada muni had reached the same conclusion after beholding the wonderful form and characteristics of Lord Chaitanya.

Yata yata avatara saba haite sar
Kabhu nahi dekhi heno premar bhandar
Safal janam din, safal nayan
Ki dekhilun Gaura rupa , prasanna bayan
(Chaitanya Mangala , 2.121-122)
–
(Narada muni says) ‘Of all the Lord’s incarnations , Lord Gauranga is the best. I have never ever seen such a reservoir of pure ecstatic love. My life has become successful, my eyes have borne fruit, as today I have been able to behold the beautiful form of Lord Gauranga with His pleasant, blissful, smiling face’.

In this verse Lord Chaitanya has predicted how the whole universe shall be intoxicated with His divine love and be flooded in devotional ecstasy. He has predicted how being madly engrossed in His ecstatic love, the world shall be completely delivered from their miserable suffering condition.A person who receives Mahaprabhu’s causeless mercy cares for nothing else in this material world and achieves the highest perfection of life. The words ‘Nija gune’ is very significant, as Sri Chaitanya Mahaprabhu has specifically mentioned over here ,about the love that others shall possess for Him ,His own form and its transcendental qualities (and not for any other manifestations of the supreme). Though all forms and manifestations of the Supreme belong to one and the same Supreme person, yet there are differences when it comes to each of their mood, nature, characteristics, qualities, magnanimity and purpose.
So worship of Lord Gauranga, the golden avatara, is very essence of devotional science, which shall soon be revealed in this fortunate age of kali.

Translation –
The preceding conversation between Lord Vishnu and goddess Katyayani, has been revealed in the Brahma Purana, Utkala khanda. King Prataparudra, who is an ocean of all transcendental qualities , was instrumental in distributing several copies of this passage.

Translation –
(Narada muni continued) ‘Smiling, Narada muni, the great sage, then asked Lord Shiva and Katyayani devi, “why don’t you remember this pastime?” The Lord ordered me, to announce His upcoming appearance in Kali-yuga’.

Translation –
(Narada continued) ‘When the Kaliyuga arrives, the Lord ,along with His eternal associates shall descend to earth to remove all calamities.The master of the world (Lord Gauranga), along with His associates, shall take birth in a brahmana family’.

(The supreme Lord said) I shall take birth upon the earth as the son of mother Saci assuming a golden form in a beautiful place on the bank of the Bhagirathi (Ganges) in the first part of Kali-yuga.

Translation –
Playing upon his vina, Narada muni then departed. The sweet flattering sound of his vina was just like a stream of intoxicating nectar, that filled everyone’s ears. It delighted the hearts of all in these three worlds.

Return to the Table of Contents for this Book