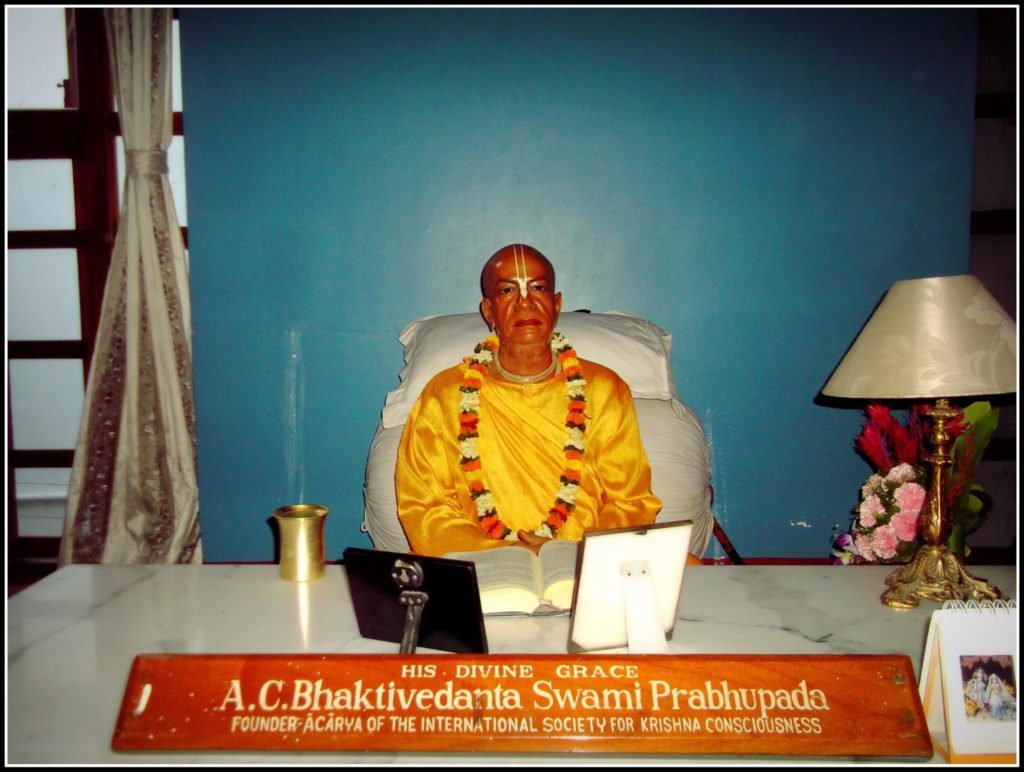 Sri A.C. Bhaktivedanta Swami Prabhupada, the founder acharya of Iskcon, our dear spiritual grandfather, has been and continues to be the greatest proponent of Krishna consciousness in the entire world. A true visionary, Srila Prabhupada, has built a home in which the whole world can live in peacefully. The International society for Krishna consciousness (his brainchild) has expanded its footprints to all corners of this world today, and has been instrumental in distributing the causeless mercy of Lord Caitanya in every town and village. Srila Prabhupada is none other than the commander in chief of Lord Caitanya, and he was empowered by the Lord and His Gurudeva to deliver the fallen souls all over the world. From the time he landed in America (1965) till the time he left his body (1977), Srila Prabhupada had encircled the globe a full 12 times, overseeing the construction of over a hundred Iskcon temples.In addition he has left us with hundreds of his books that continue to provide guidance and inspiration to devotees all around the world.‘The Gaudiya Treasures of Bengal’ has covered the life and pastimes of Srila Prabhupada in more detail in the article entitled – ‘The birthplace of A.C Bhaktivedanta Swami Prabhupada, Tollygunge’. In this present article ,however, we intend to provide a brief sketch of his pastime places in central Kolkata ,where he had grown up and spent a significant portion of his life. 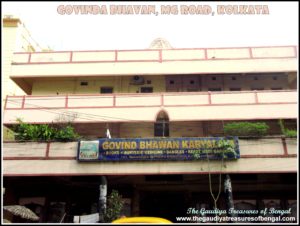 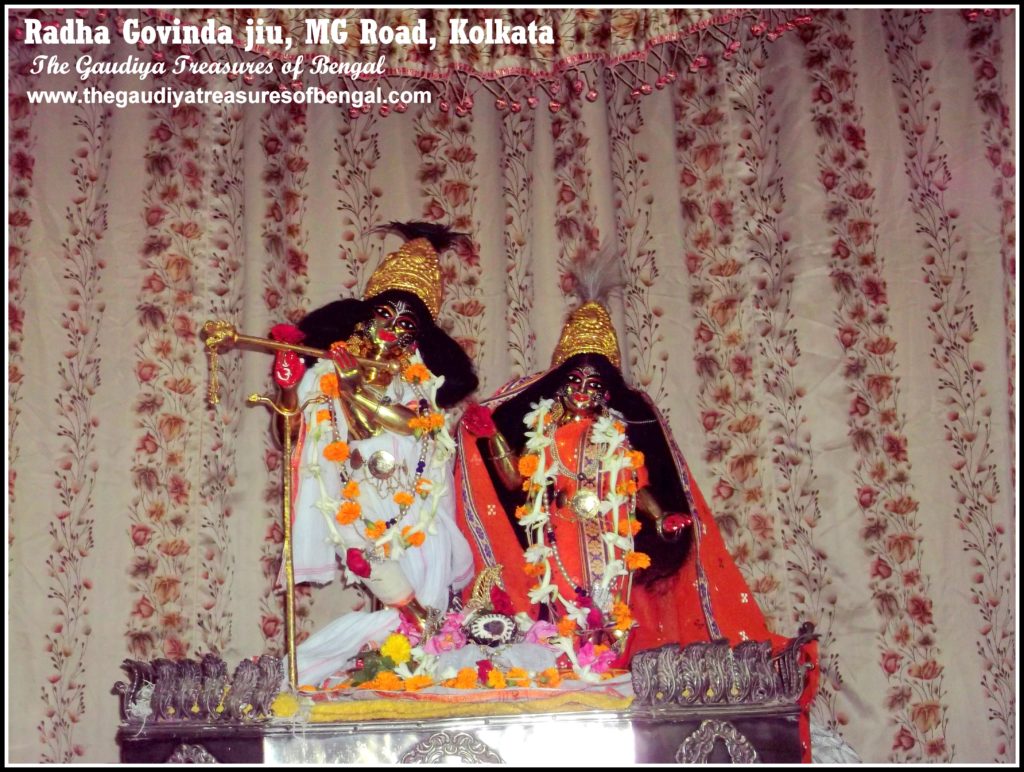 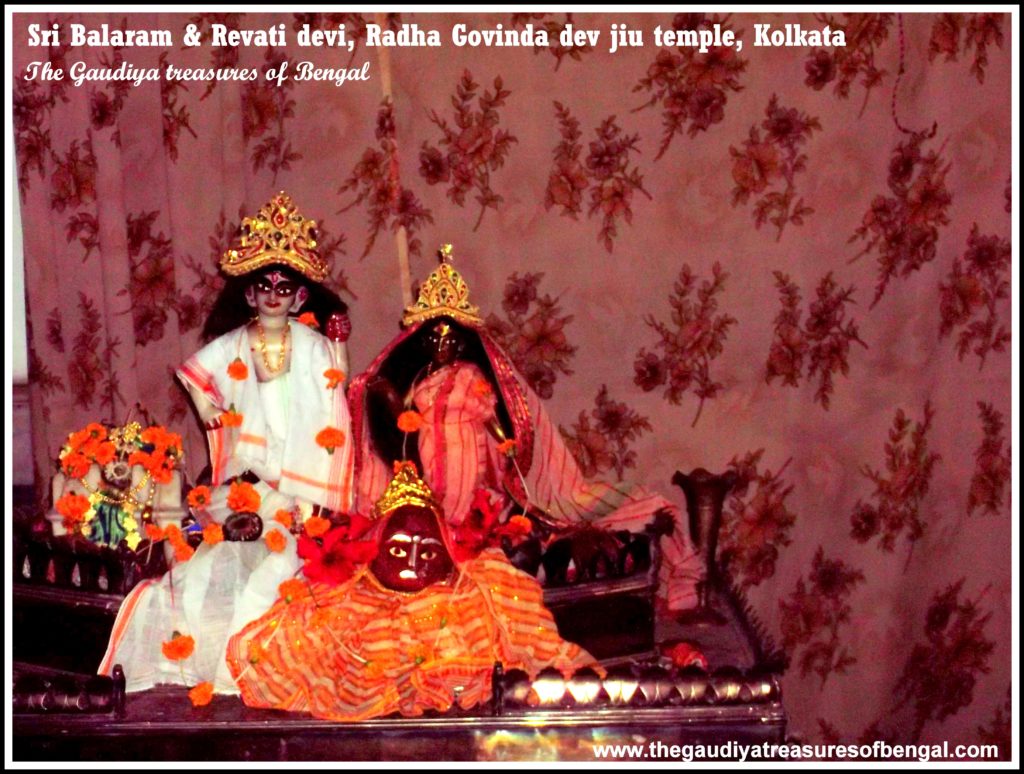 How to Reach : One needs to board a metro and get down at the MG Road metro  station. Reaching here, one needs to seek the address of the Mutty Lall Seal’s school. It is quite easily visible from the main road itself and hence shouldn’t be too difficult to locate. 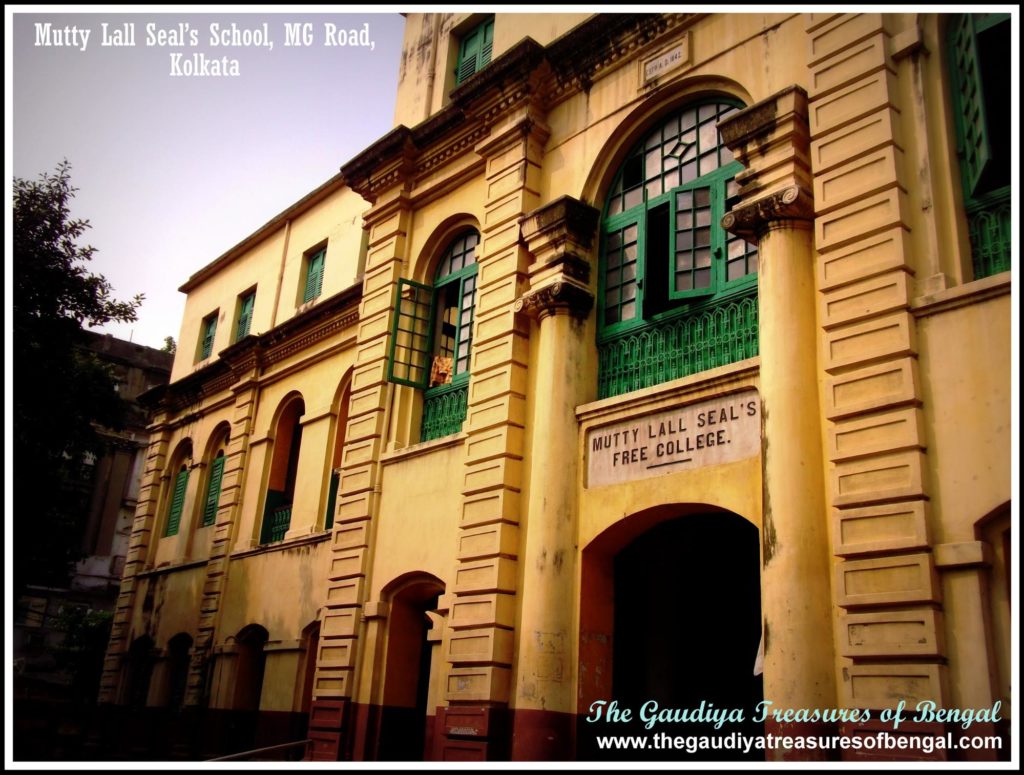 How to Reach : We are providing below the official address of the scottish church college : 3, Urquhart square, Kolkata – 700006 . This place is located near the Hedua Park. One  needs to get down at the Girish Park Metro station and avail an auto rickshaw from the Beadon street crossing, to reach Hedua. Reaching Hedua, one can seek directions to this college. 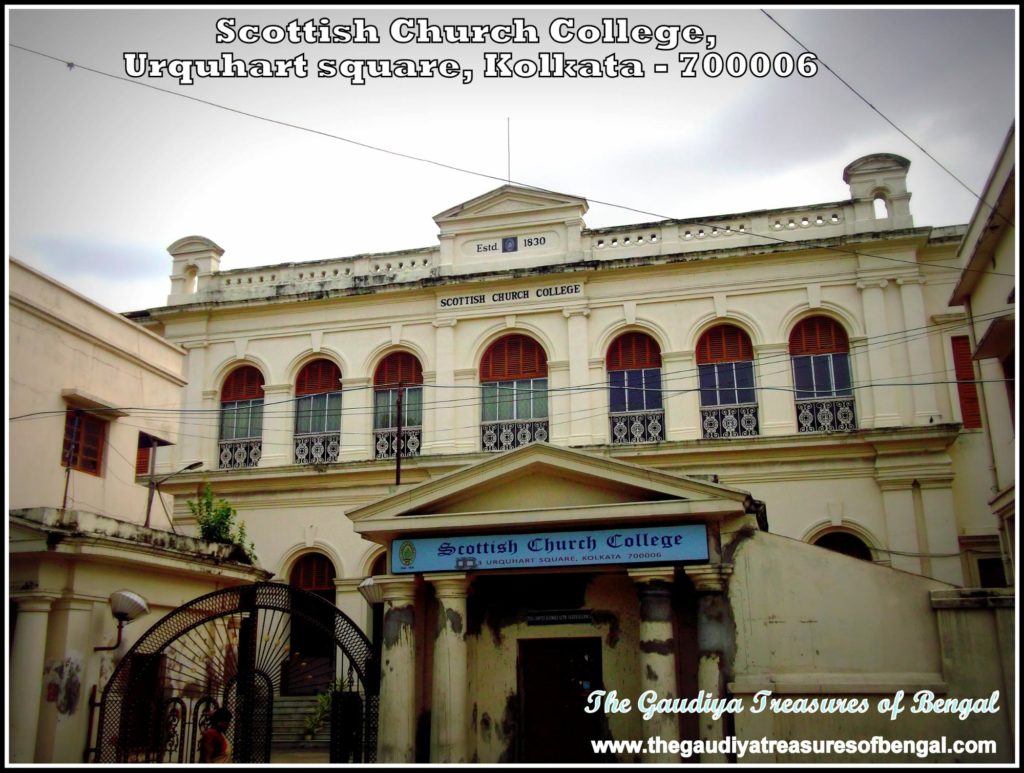 How to Reach:  One can board a metro and get down at the Sovabazar Metro station. From Sovabazar one needs to hire an auto rickshaw in order to reach the Gauri Bari Lane.

How to Reach : One can board a metro and get down at the Shyambazar Metro station. From there one can avail a cab and directly reach the Baghbazar Gaudiya Math, situated on the bank of the Ganges. The postal address of this place is 16/A Kaliprasad Chakraborty street, P.O. Baghbazar, Kolkata -700003 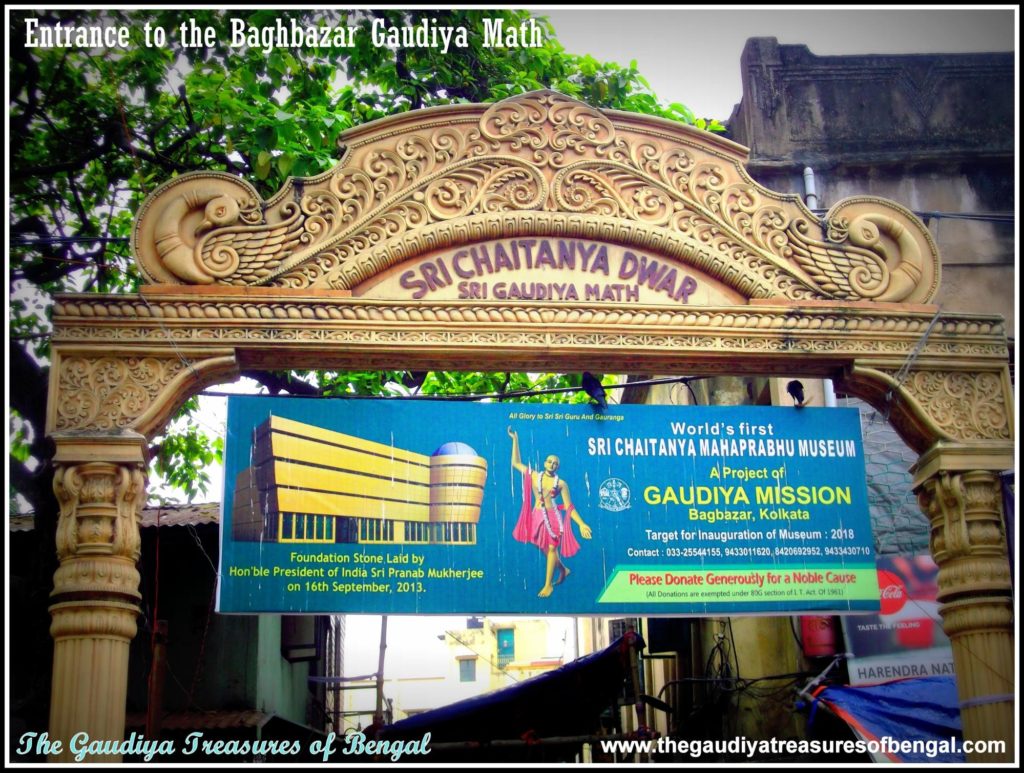 How to Reach: One can board a metro and get down at the Rabindra Sadan Metro station. One can walk the rest of the way to the 3C Albert Road temple, which is situated just opposite to the Birla High school (Minto Park). 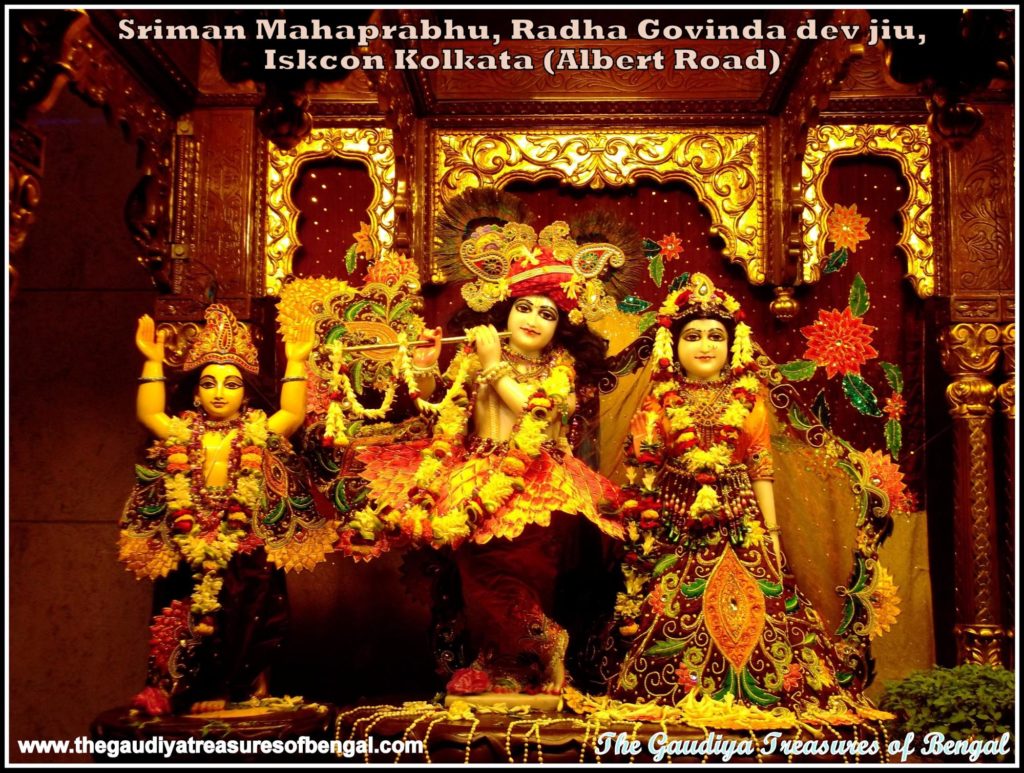 ‘The  Gaudiya Treasures of Bengal’ has been striving to seek shelter of great personalities like Srila Prabhupada ,throughout its spiritual journey. It is only with this objective of receiving their mercy and sharing it with others, that we have set out from our homes, trying to reveal to the world the mood and esoteric pastimes of these great men.The life and teachings, of these stalwarts inspire us to imbibe the same values and principles in our own lives and we pray that they mercifully bless us, so that we may forever contemplate upon their blissful pastimes.

We worship the lotus feet of Srila Prabhupada and our spiritual master ,whose causeless mercy have empowered us ineligible fools ,to gain entrance and take up service in this transcendental abode of Kolkata. We seek shelter of this holy land, and pray that its glories remain forever imprinted in our heart.‘The Gaudiya Treasures of Bengal’ offers millions of obeisances and humbly prays unto A.C Bhaktivedanta Swami Prabhupada that we advance in our Krishna consciousness, develop attachment unto the lotus feet of Lord Gauranga and are able to serve Sri Guru & Vaishnavas, by our honest and sincere efforts. We seek his blessings and compassion , in successfully rendering this humble service of reciting the pastimes and revealing the pastime places of the Supreme Lord and His beloved associates.We shall consider ourselves greatly fortunate and our existence meaningful if Lord Gaurahari , Srila Prabhupada and our dear spiritual master are kindly pleased with our endeavours.

Accommodation – One can choose to stay at any of the hotels (there are many) in Kolkata. One can also opt to stay in the guest house of Iskcon Kolkata (3c Albert Road, Near Minto Park). 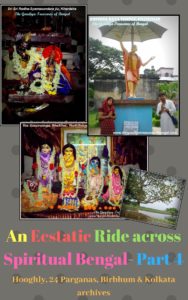